Bill Warren and his father, Bill Warren, Sr. after a successful cartop landing.

Filming Bill Warren in his Chipmunk

Daring Damsels knee-hang from Bill Warren’s 450-hp Stearman. Cathi Reavis and Connie Warren in yellow flightsuits. At the time, the ONLY duo wing-walkers in the world.

Simply Magic in flight over the Rogue Valley, Southern Oregon

Bill Warren flying inverted in a Stearman over the Rogue Valley in Southern Oregon.

Welcome to SkyBilly.com – All about Aviators 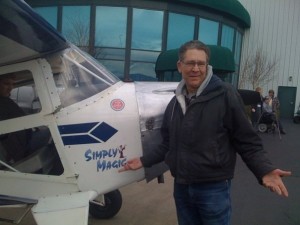 The original intention for this site was to honor the memory of our friend Bill Warren, aka Sky Billy.  As we sorted through the photos and memorabilia from his life, we realized there is a significant historical element which needs to be addressed here also.

For instance, a simple Google search for “Great American Flying Circus” returned 2 or 3 relevant links.  The men and women who made up the GAFC landed an airplane on a car and walked on airplane wings.  Ronn Dilling, their stunt man, regularly performed an in-air transfer from one plane to another – Now That’s Incredible!

This is exciting to m 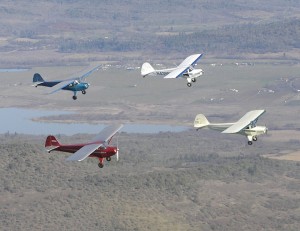 e.  I want to know more!  How did Jessie Woods decide to be a stuntwoman?  How many other people were part of this GAFC?  Who were those Daring Damsels in the airshows?  Where are the pictures and stories for all of the children and grandchildren of these aviators?

We thought we knew Bill well, but continue to be amazed by how many people he has touched in his life.

Perhaps you have been inspired by a true aviator.  Maybe your father, aunt or uncle flew with one years ago.  There are fond memories and great aviation stories out there, just waiting to be shared.

It is our hope this website will serve and honor the aviation talent and pioneering efforts of all the aviators posted here.

A Friend Leaves the Planet

Permanent link to this article: https://skybilly.com/

You’ve probably read about this recently in AOPA, EAA or Aviation Week, and now it’s come to Medford. The Medford Airport recently mailed letters to all tenants in the county-owned hangars.  In this letter, the county voiced their concern  for continued Airport funding if tenant hangar contents are out of compliance with regards to “non-aviation-related END_OF_DOCUMENT_TOKEN_TO_BE_REPLACED 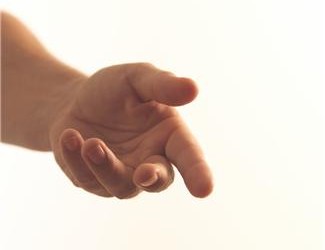 Proposed increases to Oregon’s Aviation fuel and Fee prices.  Write to your Legislator today! Proposed bills are now being considered in the Oregon State Legislature which would increase all aviation fees and increase aviation fuel taxes.  Please email the legislators on the deciding committee to voice your opinion. Be Involved with Aviation-related Legislation in Oregon END_OF_DOCUMENT_TOKEN_TO_BE_REPLACED

STOP a proposed increase in Oregon’s aviation fuel and fee prices – write to your Legislator TODAY!!

Friends and fellow aviators from across the Pacific Northwest came together to enjoy laughs, fond memories, and a nice cold beverage.

HAVE VIDEO OR PICTURES TO SHARE? We would love to see them! Just Contact Us – upload your picture, or send a message if you have many.

Brian Lansburgh has compiled a short video from Saturday afternoon.